Student blog post: The history of ‘cotch’: from Victorians to Grime artists

Posted by Unknown on November 18, 2016
Elizabeth Doherty is a first year student in English Language and Linguistics with an interest in language use in music and the media. Beth carried out her research using the Oxford English Dictionary (online) and the Early English Books Online Corpus.

The history of ‘cotch’: from Victorians to Grime artists

As a young person, it’s my experience that Grime music and associated youth culture has had significant impact on my language use and that of my social group. In my life, the rise of Grime appears to be linked with an increase in use of certain ‘slang’ terms. Linguistically, the Grime genre is full of language with interesting histories, and just one of these words is ‘cotch’. People my age have the metalinguistic belief that this is a new word with a recent etymology, but this isn’t true.

‘Cotch’ apparently derives from Jamaican English. It said that it is derived from the verb ‘scotch’ with deletion of the ‘s’, leaving ‘cotch’. In the Oxford English Dictionary (OED, online), it says that ‘scotch’ is from Barbadian English, and means ‘to find or be given temporary make-do accommodation’. This can be seen to link to the noun sense of ‘cotch’. In the OED, ‘cotch’ is said to mean (in Jamaican English) ‘a place to sleep, rest or sit temporarily’.

According to the OED, the first instance of ‘cotch’ means something like ‘to rest oneself; to lean on something for support’, with usage in the late 1800s, e.g., ‘they are not supposed to cotch even for ten minutes…’. This shows that ‘cotch’ as lexeme was present in the Victorian era.

As part of my research into ‘cotch’, I looked into the Early English Books Online corpus where I found an instance of ‘cotch’ dating back to the 1600s:

It was not clear from the information in the corpus what this noun phrase meant – it could have been a misspelling of something else (a coach?). Still, it is possible that the word was in use quite early on. In any case, most of the usages I found related to some sense of relaxation, as in the Victorian instance above.

Today, ‘cotch’ has a very colloquial meaning. It is often described by young people as the act of ‘chilling out’. This definition of ‘cotch’, meaning to chill out or relax, is not surprising given the definition of ‘cotch’ during the Victorian era. The word appears to be popular with Grime artists, an underground genre of music often associated with youth culture.

Dizzee Rascal is a famous Grime artist. His debut album is called ‘Boy in Da Corner’. The first track of this record  features ‘cotch’ as a verb:

(2) ‘I’m just sitting here, I ain’t saying much, I just watch I really don’t feel like moving, so I cotch’.

We have seen above that ‘cotch’ can be both a verb and a noun, and so belongs to different parts of speech. On today’s Grime scene, I have noticed that the noun sense is often marked by a possessive. These instances appear to me to be linked with the competitive nature of Grime music, which is often a convention of the genre, e.g:

Here, a ‘white man’s cotch’ can be interpreted as referring to a home or a place which one perhaps owns, almost as a metaphor for territory. It’s my perception that more artists and fans/young people are adopting ‘cotch’ in either part of speech to identify strongly with a particular subculture.

As you can see, ‘cotch’ has a very interesting history from Victorian society to its inclusion in Grime and youth culture. It seems to be that it’s meaning is reasonably fixed – I perceive ‘cotch’ to be common as a verb, but corpus work would be needed to confirm this. The core meaning is definitely to do with resting or chilling out. In any case, after such a long history, the lexeme really should take five minutes to cotch. 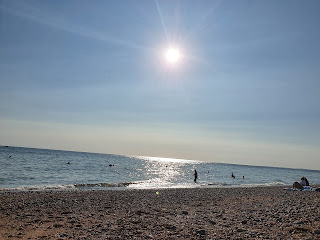 The Sussex  Junior Research Associate  scheme is a brilliant opportunity to learn about doing independent research. In 2020-2021, two second-year linguistics undergraduates, Harriet Nye and Joe Thompson-Smith, won funding to work on their own projects for 8 weeks over the summer.  In this post, our guest blogger is Harriet Nye who reflects on her experiences of adapting to the demands of conducting research in the context of a global pandemic.  Thanks for contributing Harriet! You can see the conference style poster that Harriet created based on her research here .  --------------------------------------------- University had just closed due to Covid-19, and lockdown was imminent. Summer 2020 for me was looking very bleak. I had been relying on getting a summer job, and the idea of me staying at home with nothing productive to do was very overwhelming. So when Dr. Justyna Robinson approached me and asked if I would be interested in working on a research project with her, I jumped 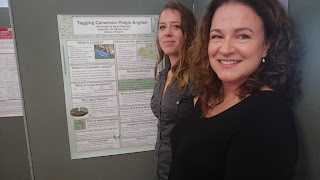 We're pleased to publish this guest post by Sarah Fitzgerald, a current third-year BA English Language and Linguistics student who took part in the Junior Research Associate programme in Summer 2015.  ---------------------------------- Six months ago I went to see Dr Melanie Green. I wanted to discuss third year modules with her. I mentioned as I was about to leave that I had heard about the Junior Research Associate (JRA) scheme and thought it would be interesting to apply but had no idea what I might study. That passing remark ended up leading to the most interesting summer of work I’ve ever done and to so many opportunities which I would never otherwise have been offered. Melanie is currently building a corpus of Cameroon Pidgin English (CPE) along with Gabriel Ozón at the University of Sheffield and Miriam Ayafor at the University of Yaoundé in Cameroon. She suggested that I apply for JRA funding for a project to create and test a system towards tagging CPE for parts